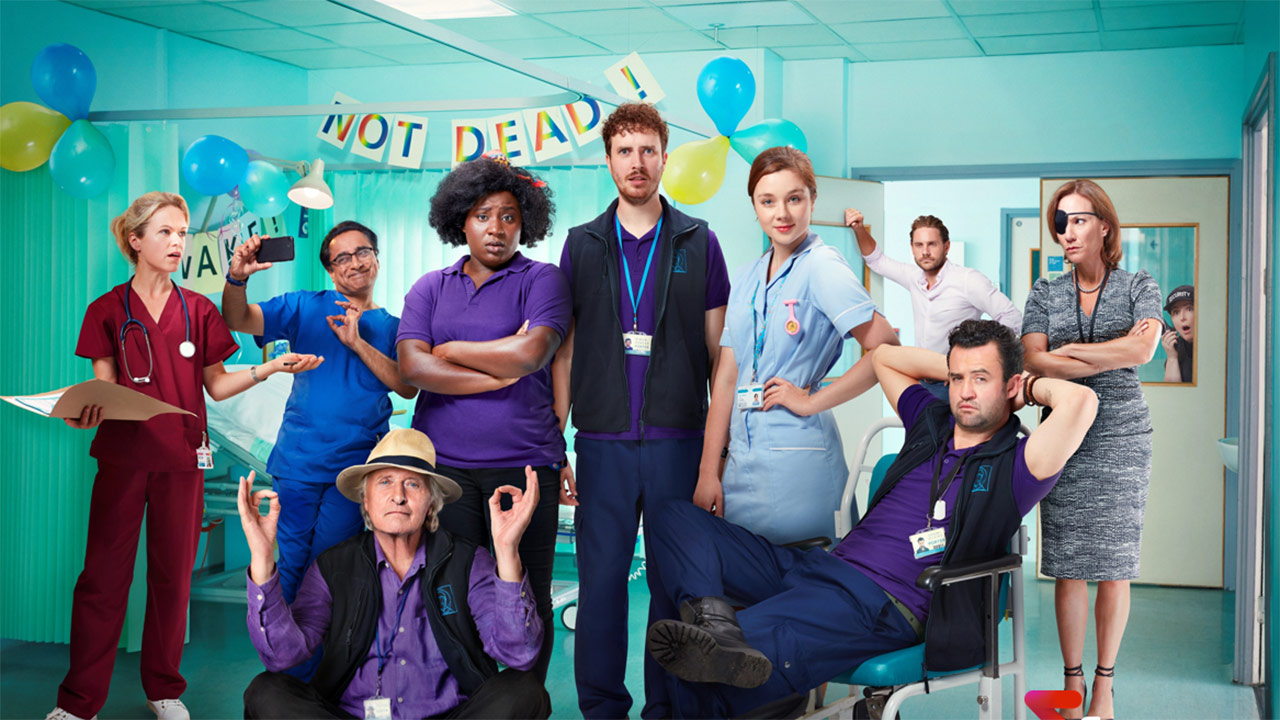 A woman dressed as an orc from Lord of The Rings struts into the emergency room suffering an allergic reaction, while down in the basement a top flight surgeon strips naked and burns his belongings in a spiritual ceremony…welcome to the world of Porters!

This is just an average day at St. Etheldreda’s Hospital where chaos reigns and most of the porters spend more time on their money-making scams and their love lives than they do their work.

The comedy returns to Dave on Thursday 14 March for a six-part series after winning over an army of fans in its first outing last year. It follows the lives of the staff who often go unnoticed in the underbelly of the hospital.

When trainee porter Simon joined the gang last year he had to contend with queen bee Frankie and her golf-club swinging best mate Tillman – played by Blade Runner star Rutger Hauer. This time around Tillman is holidaying with the Dalai Lama so bosses have drafted in loudmouth Anthony (Daniel Mays) to boost the ranks and it’s not long before he’s launched a turf war with Frankie.

For Susan Wokoma, who plays Frankie, it was an easy decision to slip back into her alter ego’s shoes … but not her uniform. She laughed: “It’s nice as human beings to be back together but I bloody hate those uniforms! They are the most unflattering, uncomfortable outfits and don’t make anyone look good!

“We had a good crack at the show last year and became really good mates so it means by the time you get a second series you know each other so well, it’s like coming to work with your mates. There’s no nerves because we’ve already got that out of the way, it feels like we can play around with the characters a lot more this time around, it’s been so much fun.”

With Rutger only making a handful of appearances as Tillman this series the spotlight is firmly on newcomer Daniel, who’s more famous for his roles in gritty shows like Line of Duty than he is comedy.

But Ed Easton, who plays Simon, says Daniel slipped into the team without a hitch. He said: “We had about half an hour chatting before filming on the first day and that was it, he’s just a really normal, nice person. He’s really funny and fitted in so easily. We didn’t prank him though! We should have pranked him, what were we thinking?!”

Daniel is just the first of a host of familiar faces strutting the hospital corridors this series as viewers can look forward to seeing Sally Lindsay, Siobhan McSweeney, Tanya Franks, and Sinead Keenan as the permanently exhausted Dr Bartholomew.

So what are the porters up to this time around? From robbing dying patients and dodging a serial killer who’s escaped to providing sperm specimens, no two days are the same at St. Etheldreda’s Hospital. Even nurse Lucy – played by Vanity Fair’s Claudia Jesse – gets in on the action.

Normally this mild-mannered nurse is more concerned about bagging herself a rich doctor to date, but this time around she’s showing what she’s made of when she joins an all-women fight club in the basement.

Claudia laughed: “Frankie starts up this subterranean all female fightclub in the basement to try and make a bit of extra money on the side and it turns out Lucy’s a bit of a badass! She packs a punch! I got to do the fighting, I was so nervous but it was so much fun. We had stunt doubles but only for the wide shots, the rest was me! It was so fun seeing all these women going nuts!”

With news that ITV bosses have scrapped comedy from their flagship channel, Dave is making sure everyone has something to laugh about as Porters is just one of many comedy series to launch this year, and Susan says it’s a shame comedy is taking a hit when the country actually needs something to laugh about. She said: “I just don’t understand the decision at ITV… I think there’s definitely a place for out and out escapism on TV right now. It’s good to laugh!”

* Porters starts on Dave at 10pm on 14 March, and the entire box-set will be available to binge-watch on UKTV Play.